I made the move last Sunday to the new spot for my bare bones belongings to dwell, and it took about five days for me to get mostly organized/somewhat puppy-proofed. I had to rearrange furniture a bit after realizing my first layout was flawed. The giganto crate for Rowdy needed a place to go and I had to add a desk to the mix when it was clear Rowdy is not quite ready to just nap and chill and quietly play with his toys all day while I work. Instead, he’s into EVERYTHING and only naps to recharge for the next round of making me nuts. So he is contained with me in the bedroom so I can work and keep an eye on him.

Most of my conference calls are spent with me on mute. When I have to come off mute, I’m usually apologizing right away for the squeak toy noise in the background. Rowdy has plenty of quiet toys, but noooooo, he can’t play with those when I have a call. But if I can hear a sqeaker being squeaked to death, I at least know he’s not chewing on something else like electrical cables or the bed frame. (For anyone concerned about him swallowing a squeaker, he is not a toy eviscerator like some dogs. And he does not get squeak toys or stuffed toys without supervision. I am well aware of the dangers of those types of toys and monitor him accordingly).

He loves eviscerating boxes though. I mistakenly thought that would be a quiet “toy” for him to destroy but he finds a way to make it as noisy as possible including growling or barking at the box while he tears it to pieces. Again, it’s not furniture or electrified, so have at it, dude. 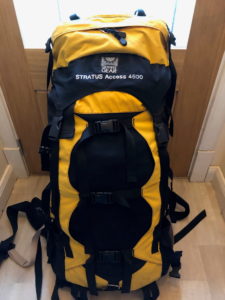 This pack. I’m dying to get back into this pack again. Travel has been significantly hampered with all things COVID, and I’m itching to go wandering. This time last year was my sabbatical, and I desperately miss being a turtle, carrying my belongings on my back, and finding new places to get lost. I had plans to go back up to Montreal this summer. Not happening. So local wandering is what is happening. I just have to sort out doing it with a pup in tow. His leash walking skills range from about a C+ to B-, so I can’t go on long walks with him yet. We’re working on it though and practicing vehicle travel with short drives while he is crated. He isn’t ready for riding in a seat with a harness. That will be a while.

My weekends have me back to writing which feels great. I’ve been in too much of a state of flux to really sit down and write on the weekends, so I’m thrilled to have that routine back … in between Rowdy wrangling sessions when he is awake and wreaking havoc.

That it is now mid-July is a bit terrifying. Less than three months to the release of Echoes of Darkness–that’s exciting! The terrifying part is I’d planned to have the third Echoes book done by the end of the summer. I gotta tighten up which means wrapping up this post and getting back to that first draft. I finished one chapter this morning already and want to get another two done by Sunday night. Time to get back to the writing work! 🙂