It is safe to say that writing activities have taken a significant blow with the introduction of Rowdy into everyday life. I knew it was coming, but didn’t know it would have such a strong impact. We’re still working out our schedules, so while he is being lazy this morning (he played ALL day yesterday), I get to tackle the keyboard for a little while, but only a little while. His nap will recharge him then I will be at his mercy until he winds down again a bit later.

Now, that is not to say that this boy makes me miserable. He doesn’t. He mostly doesn’t. When he is snoring and dreaming and kicking me at night, it’s rather miserable but somehow cute at the same time. When he is a total bed hog and steals my pillow, it’s annoying for sure. But his face and those big frickin brown eyes earn him a lot of slack.

He has quadrupled in size in the two months that I’ve had him and still has a ways to go before he is full grown. In the interim he is all legs and lanky and clumsy as hell. He makes me laugh A LOT. 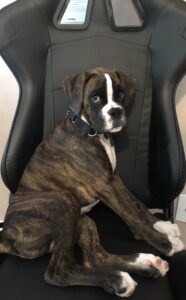 Oh, remember the bed hog thing? He likes my work chair now too, especially when I give in and let him have it while I’m standing and working. I know I am sometimes the one being trained here. I’m okay with that too. And I don’t make training him always easy for him to learn. His name for one. He kinda knows it now, but I make things more difficult by giving him a plethora of nicknames. Here are a few:  No. NO! STOP! Give me the book! Wait. Hang on. Rowdy McRowdypants (that just came out one day). Legs. Dude. Hot mess. Good boy. Bad boy. Weirdo. Leaf eater. Chair thief. The Hound. Bed hog. Stop being an ass. No, biting! Here’s your toy. No, not me. The toy. OW! Bastard. STOP BITING.

You get the idea.

Most of the puppy teeth have fallen out and have been replaced with his blunter permanent teeth. Thank you, puppy tooth fairy for that gift. Holy crap the needle teeth were destroying me daily for a while … even when I was wearing Bitter Apple chew deterrent on my hands, arms, shoes, shirt, etc. It helped, but it didn’t completely stop the shark attacks. Thankfully he is moving beyond the Must Chew on My Human phase.

Lately when I get tagged with his teeth, it’s when we’re playing and he goes after a toy to grab it before I can throw it, and he misses the toy and gets me instead. Oof. Those hurt, but he doesn’t get in trouble for them since it wasn’t intentional. The blunter teeth hurt but don’t tend to produce a blood-letting session like the needles did.

Junior (another nickname) is still napping so I must end this and flip over to working on the third Echoes novel to wrap that guy up. Aiming for the end of Sept to finish the first draft!!