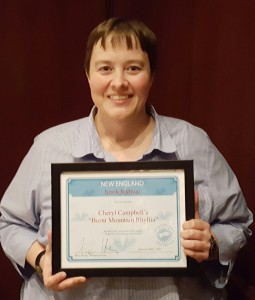 This past Saturday I made my trip down to Boston to the New England Book Festival awards ceremony. Burnt Mountain Rhyllia, the 4th in the 5 book series, received an award for winner of the SciFi category of the festival.  I am beyond ecstatic!

I had a wonderful time at the festival and met several great authors from around the US. To see the list of all the winners in the 2016 New England festival, click here.

The most notable thing that I learned a few months ago about these awards, and also conveyed to the other winners there on Saturday during my wee acceptance speech, was that these awards, including honorable mentions, are a big deal. We wrote a work that we put into a contest for critique and to be compared to other works. To come out of that process with an award is exactly how an author obtains critical acclaim.

I had never previously considered myself a critically acclaimed author, but that’s exactly what these awards mean. I am thankful for the patient person that pointed this fact out to me and even took the time to explain it to me a second time, and more slowly, to make sure I understood. Once that sank in, I realized how much I’d underestimated my previous honorable mentions. Never said I was smart! 🙂

So during my wee speech, I relayed this reality to my fellow winners, most of them first time winners and also those underestimating the festival’s significance. A publisher in attendance thanked me after the ceremony for reiterating what she had been trying to get her client, another award winner that night, to understand. Cool stuff for sure!

Photo above by another winner, Jared C, with my phone, Jan 2017.

That is AMAZING! Congratulations!!!

Super proud of you! You are definitely underestimating yourself. Congratulations on this great accomplishment and look forward to reading more from you.

Marvelous that you won. Not surprising. I respect your courage for even entering. Those honorable mentions were preamble, eh?

It’s funny how artists are either arrogant or excessively humble. (I manage both simultaneously, which might be an “artist” thing.)

I like to think of myself as “gloriously clueless” (my personally coined phrase that describes me in so many things I do haha). It’s what keeps me learning and laughing at myself!